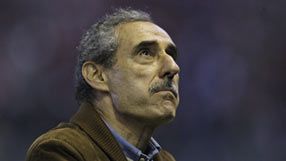 A statement by the club, one of Argentina's oldest and most successful, said River had "resolved to sever Mr Angel Cappa (from the post) as coach of the first division team.

"In the coming hours, it will be decided who will be the next coach of the professional squad," River said on their website.

River, 11th in the Apertura championship with 18 points from 13 matches after a 1-0 upset defeat by promoted All Boys on Sunday, face arch-rivals Boca Juniors in their next match on November 16 under caretaker JJ Lopez.

"At no moment did I think of resigning... I wasn't expecting this (sacking), but I can't say it surprised me," Cappa had told TyC Sports television in an interview earlier confirming the River board had decided to end his contract.

Club president Daniel Passarella, Argentina's 1978 World Cup-winning captain, appointed Cappa in April five matches before the end of last season after he steered Huracan to a surprise second place in the 2008-09 Clausura championship.

"I don't like to interfere in other people's decisions and (Passarella) must have taken this one thinking it was best for River and I have to respect that," Cappa, 63, said.

"My contract was for 38 matches and this is very soon to make a decision," Cappa said. "I was in a process of looking (for my team). In 18 matches I had 50 percent of the points which isn't bad."

Former River midfielder and coach Americo Gallego is favourite to take charge of the team, who languish in a promotion playoff berth with a poor three-season relegation average.

Gallego has been out of a job since he coached Independiente last season but did not have his contract renewed in June.

Another option touted by media, who have been asking fans who is their favourite, is Marcelo Bielsa, who said last week he was leaving his job as Chile coach as a new board is set to take charge of the Chilean FA.

It has been one of the worst seasons ever for both of Argentina's most successful clubs with Boca in 13th place one point behind River, who won the last of their record 33 league titles in the 2008 Clausura.

Juan Sebastian Veron's Estudiantes lead the championship, the first of two in the season, with 30 points. Velez Sarsfield are second with 27 points.

Cappa said the high turnover of coaches in Argentine football was due to what is known here as "short-termism" in which the need for good results is immediate, exacerbated by the season being divided into two 19-match championships.

"I'm sure it's going to be modified," Cappa said, which followed Argentine Football Association president Julio Grondona hinting not so long ago at a return to one traditional, all-season championship.

"The standard gets worse and worse because there is no time to work," Cappa said.