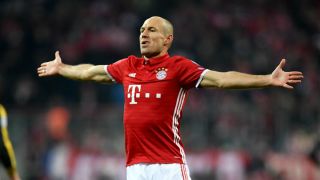 Bayern Munich attacker Arjen Robben has set his sights on at least one more Bundesliga title as he aims to outdo Dutch legend Johan Cruyff.

Robben won his sixth Bundesliga trophy this campaign to take his tally to 10 domestic league titles in total, having previously enjoyed success with PSV, Chelsea (twice) and Real Madrid.

This year's German title win saw Robben draw level with Cruyff - who also lifted 10 domestic titles throughout his career with Ajax, Barcelona and Feyenoord - and he is desperate to do even better than his illustrious compatriot.

"I am very proud to have won ten league titles in total and to have done so in four different countries," the 33-year-old told TZ.

"But it makes me even prouder that my 10th title saw me draw level with Cruyff, Netherlands' best player of all time.

"I will outdo him if I win another title. That is something that keeps me going."