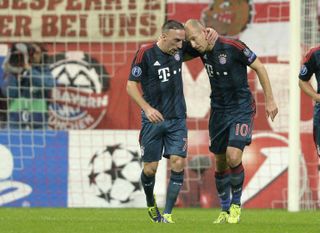 The Netherlands international passed up the chance to convert the 25th-minute spot-kick, an opportunity that came after he had been felled inside the box.

Robben deferred the responsibility to Franck Ribery and he converted it despite calls from manager Pep Guardiola for the 29-year-old to step up and give his side the lead.

The incident came just four days after Robben had reportedly been left angered after being told not to take a penalty in the 4-1 Bundesliga win over Mainz last Saturday.

But Robben is eager to drop the issue and move on.

"Let's not talk about it, let's drop it.

"We had a very good game and 5-0 is a great result but we could have done better if we really want to be very critical."

Guardiola confirmed that he did want Robben to take the penalty, however, Ribery attempted to smooth things over.

"The coach said Arjen but Arjen did not want to shoot.

"That is football. It can happen it's natural."

David Alaba doubled Bayern's lead following the penalty incident before a second from Ribery and strikes from Bastian Schweinsteiger and Mario Gotze wrapped things up for the defending champions.