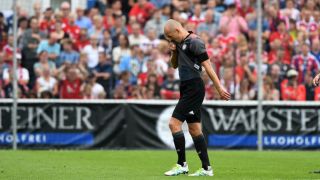 The Netherlands international was restricted to 15 league matches during an injury-hit 2015-16 and he pulled up during a sprint in the 36th minute, with youngster Mario Crnicki taking his place.

Robben had been in fine form until his injury, playing a role in Julian Green's opener after nine minutes before doubling Bayern's lead with a trademark cut in from the right.

Arjen has had to leave the field after pulling up - he's been replaced by Crnicki. Hopefully nothing serious!July 16, 2016

Franck Ribery, who himself missed large parts of last season due to fitness woes, fired in Bayern's third in the 33rd minute and Marvin Joswig's own goal five minutes after the restart had seemingly put the visitors out of sight.

However, Lippstadt - who play in Germany's fifth tier - mounted an unlikely comeback attempt, started by Marcel Rump in the 51st minute.

Stefan Parensen headed home Lippstadt's second shortly afterwards and Paolo Mailla made it 4-3 in the closing stages, but time ran out for the hosts.

Ancelotti will be happy enough with Bayern's workout despite Lippstadt's revival, with several of his first-team regulars still unavailable due to their participation at Euro 2016.