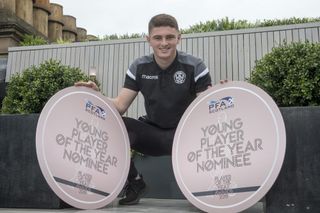 Motherwell boss Stephen Robinson insists Jake Hastie will go to Rangers with nothing but the good wishes of the Lanarkshire club.

The Ibrox outfit announced the pre-contract signing of the winger on a four-year deal on Thursday.

The 20-year-old, one of four nominees for the PFA Scotland’s Young Player of the Year award along with team-mate David Turnbull, has made a meteoric rise since returning to Fir Park in January after spending the first half of the campaign on loan at Alloa.

Robinson admits “only time will tell” if Hastie, a product of Motherwell’s youth academy, is ready for a move to Ibrox but insists he has all the attributes and will leave the club on good terms.

Ahead of the Ladbrokes Premiership clash against second-bottom St Mirren at Fir Park on Saturday, the Northern Irishman said: “What I do know is that he is a really good boy.

“He has come on to the scene and is an example of someone who has knuckled down and worked hard.

“He came back, hit the ground running and there was a lot of end product. He scored goals which won us football matches.

“Of course, in an ideal world we would have liked to have kept him for another couple of years. But there isn’t too many people in any walk of life who, offered a heck of a lot more money than we could have come up with to move 15 minutes down the road, could say no.

“So there is no bitterness, I don’t take it personally. That’s where we are as a football club.

“People have decisions to make in life and Jake’s made that decision and we wish him well, we wish him good luck. We hope it works out for the best for him.”

Robinson admits having two nominees for the players’ union’s young player award is a source of pride for the Lanarkshire club.

He said: “As I said last week, David Turnbull is the standout performer for us this season. Jake burst on to the scene at Christmas and set the place alight.

“It is a credit to what goes on in the background. You are never going to be a millionaire being a youth coach and that’s where they get their pride and credit from, everyone who worked with these players from a fairly young player right through to where we get the end product.

“To see two of them nominated is a really proud moment for the club.”

Motherwell go into the Saints game on the back of a thrilling 4-3 win over bottom side Dundee last week and Robinson expects another open encounter.

He said: “It will be similar to last week against a team that has nothing to lose.

“They will have to be cavalier in their approach. They need points on the board.

“I know Oran (Kearney) well and he will have his team highly-motivated to get a result and stay up.”