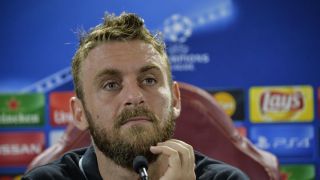 Roma stalwart Daniele De Rossi has warned his team-mates of the dual threat they will be need to counter on Wednesday in the form of Barcelona and Lionel Messi.

The sides meet at the Stadio Olimpico in Group E of the Champions League on Wednesday as Luis Enrique returns to his former club with the defending champions.

Grouped alongside BATE and Bayer Leverkusen, Barca and Roma will be fancied to progress to the knockout stages, with De Rossi also warning of the need to avoid a repeat of the 7-1 mauling they suffered at the hands of fellow European heavyweights Bayern Munich last term.

"Barcelona are a special side in that, as well as being the best team, they also boast the best player around," he said on Tuesday.

"It's doubly difficult coming up against a team like the Blaugrana, as they have both a great playing style and exceptional individuals.

"Our aim is not simply to stop them but to work hard during the match and help one another out. Messi almost always beats a man, that's why we have to stay compact and organised.

"Last season's match against the Germans was an unusual game. But Bayern and Barcelona are definitely on a similar level.

"They're two of the most dominant teams in the world. Part of our efforts to qualify will be decided tomorrow. We know it will be important, as opposed to crucial, and we cannot think that it will have an impact on our position in the standings and our efforts in the league.

"Serie A and the Champions League are two separate things, just like last year, although it definitely hit us hard losing like that at home."

Luis Enrique endured a difficult 2011-12 season at Roma as the Italian side were eliminated in the Europa League play-offs by Slovan Bratislava before finishing seventh in the league.

"He resigned so we can't really blame the club. The 2011-12 season was a tricky campaign and people judged it in a certain way, as is often the case in Rome," De Rossi added.

"He also didn't get much support from the media because perhaps it didn't suit their agenda.

"Since he left, he's shown he's not a mug like many people made him out to be and he's been successful.

"Yes, he has a great squad to work with but I'm happy for him and his staff because they're lovely people. Besides tomorrow, I'll always cheer him on."