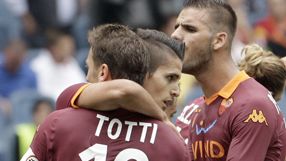 Antonio Cassano, overlooked by Italy since Euro 2012, scored his fifth goal of the season to help Inter Milan beat Catania 2-0 in a match featuring 13 Argentines among the 22 starters.

Udinese's Brazilian Maicosuel, playing only his second game since his infamous penalty shootout miss against Braga cost his team a lucrative Champions League place, scored as they beat Pescara 1-0 despite playing for an hour with 10 men.

Two goals from Amauri gave Parma a 2-1 win over Sampdoria, who had Argentina goalkeeper Sergio Romero sent off for giving away the penalty which led to the opener nine minutes before half-time.

Atalanta came from behind to beat fellow strugglers Siena 2-1, Chievo drew 1-1 at home to Fiorentina and Cagliari beat Bologna 1-0 in the other games.

Inter's sixth win in eight Serie A games this season kept them fourth with 18 points, four behind leaders Juventus who beat second-placed Napoli 2-0 on Saturday. Roma climbed to fifth with 14 points.

Roma's gung-ho attacking approach, a characteristic of seasoned Czech-born coach Zdenek Zeman, has turned them into a side where anything can happen.

Their attacking record of 18 goals scored in Serie A is bettered only by leaders Juventus, and their tally of 13 against is worse than everyone except lowly Pescara and Chievo, who have shipped 15 each.

This season has already seen them give a masterclass in winning 3-1 at Inter Milan, produce an abject display in a 4-1 loss at Juventus and throw away a two-goal lead in a 3-2 home defeat by Bologna.

Sunday's game began disastrously for them as Juraj Kucka and Bosko Jankovic swept Genoa to a 2-0 lead in only 15 minutes.

Thirty-six-year-old Francesco Totti, in his 21st season at his only professional club, pulled one back from inside the penalty area in the 28th minute and Pablo Osvaldo hooked in the equaliser one minute before the break.

That set up a second half of Roma dominance which saw Osvaldo head them in front in the 55th minute and Argentine midfielder Erik Lamela curl his shot into the bottom corner with seven minutes to play.

At San Siro, Inter started with five Argentine players in their line-up while their Sardinian opponents had eight.

Two of Inter's Argentines set up the opening goal when Diego Milito pulled the ball back for Esteban Cambiassio, he crossed to the back post where Cassano scored with a header in the 28th minute.

Inter, who also brought on an Argentine, Colombian and Uruguayan in the second half, survived some second-half Catania pressure, wasted chances on the counter and made the game safe when Palacio volleyed past Mariano Andujar.

Udinese moved on to nine points with their win again