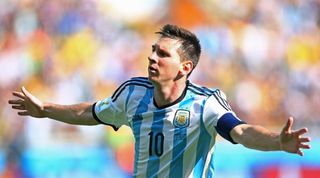 Argentina won all three of their FIFA World Cup group-stage matches to build significant momentum ahead of their last-16 clash against Switzerland on Tuesday.

Messi has scored in all three of those wins and his four goals have Argentina fans dreaming of their third World Cup title.

Romero acknowledged that they are "lucky" to have Messi in their team and added he was thankful he did not have to play against him.

"He always does something different - we are lucky to have him," he was quoted as saying by AS.

"It's hard to find words to define Leo's awesomeness.

"He makes us all very happy to have him at this level and as a team he will help you to keep playing this way.

"Messi is an absolute star.

"He's just a different player. I enjoy seeing him play. Thank goodness I don't have to mark him!"