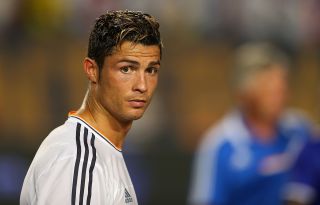 The Portuguese superstar is set to sign an extension to his current deal on Sunday, with the agreement reportedly keeping him at the Santiago Bernabeu until 2018.

Ronaldo's future was the subject of speculation during the close-season, with former club Manchester United and Ligue 1 champions Paris Saint-Germain said to be considering a move for the 28-year-old who was due to enter the final year of his existing contract at the end of the 2013-14 campaign.

But Real have now secured the forward's immediate future just two weeks after the finalising the world-record signing of Gareth Bale from Tottenham Hotspur in a transfer said to be worth around €100million.

Both Ronaldo and Bale were on the scoresheet as Carlo Ancelotti's side were held to a 2-2 draw at Villarreal in La Liga on Saturday.

The Spanish capital club are due to hold a press conference on Sunday to confirm Ronaldo's renewal.