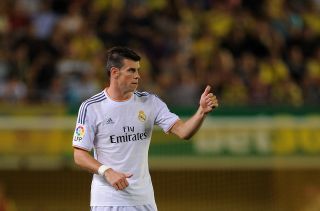 The pair are the two most expensive players in history and both scored in Bale's debut against Villarreal on Saturday.

Still it was not enough to seal the three points for Carlo Ancelotti's side, who had to settle for a 2-2 draw, but Bale enjoyed the experience.

He reserved particular praise for Ronaldo, with the Portuguese forward having this week reportedly become the highest-paid player in the world after penning a new deal at the Liga club.

"I'm excited at being able to train with the best players," Bale told beIN Sport.

"Everyone has their own opinion, but for me Cristiano (Ronaldo) is the best in the world. He's the most complete player, and I'm going to train with him, play with him and learn from the best.

"The only way that I can see to improve is by having a great coach, a great technical team, (including) Zinedine Zidane.

"Of course you're going to become a better player (in conditions) like this."

Bale described the transfer as "a dream" upon his unveiling at the Bernabeu and the Wales international reiterated his delight at having joined the Spanish capital club.

"When Madrid contact you, that's something that only comes about once," he added. "It's a very, very big club. The biggest and the best in the world.

"It has always been my dream. When I was young, my close friends and I loved European football, and at that time Real Madrid were the dominant force.

"Since then I've followed them and I loved the football they played, the players they had. Now it's great to be here."