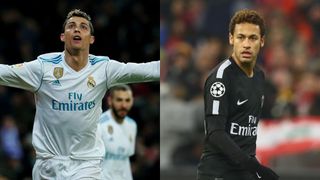 Zinedine Zidane has played down the 'Ronaldo v Neymar' billing being given to the Champions League clash between Real Madrid and Paris Saint-Germain, insisting the tie will be more than just an individual battle.

An encounter between the world's most expensive player and the world's best adds an extra layer of intrigue to what is already a mouth-watering match on paper.

Rumours linking former Barcelona star Neymar with a move to the Santiago Bernabeu only serve to increase the anticipation ahead of the tie, which begins with the first leg in the Spanish capital on Wednesday.

But Madrid coach Zidane is reluctant join in with that excitement, instead stressing the importance of the team effort, and not just those marquee players.

"We talk about two great players but tomorrow it's Real Madrid v Paris Saint-Germain, not Neymar v Cristiano," he told a news conference.

"We can talk about a player like Cristiano, who has done amazing things in the game and won five Ballons d'Or, but everyone can see Neymar's quality on the pitch.

"He's a quality player but we don't want to see a duel between Cristiano and Neymar, we want to see Real Madrid v Paris Saint-Germain."

Zidane has come under pressure during a disappointing domestic campaign for Madrid, which sees them sit 17 points adrift of LaLiga leaders Barcelona having been knocked out of the Copa del Rey by Leganes in the quarter-finals.

But the former France international, whose future will be in serious doubt if Madrid cannot overcome PSG, rejected claims this week's clash had the feel of a final.

"All the games are important for me and the future doesn't bother me too much at the moment," he added.

"It's not a final for me. It's a Champions League match.

"We've got two legs and what we have to do is go out and play well. The rest I'm not too worried about.

"We've got no pressure. We're happy to play these games.

"People want to see a good game and you'd have to ask PSG if they're feeling any pressure."