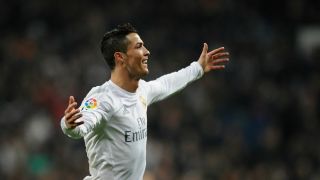 Madrid have collected 10 points from four games since Zidane replaced Rafael Benitez at the helm, netting an impressive 17 goals in the process.

They proved much too strong for Espanyol on Sunday and Ronaldo - who scored a hat-trick to take his La Liga tally in 2015-16 to 19 goals - was quick to underline his coach's role in their good run of form.

"Zidane has come up with different ideas and we feel much better," Ronaldo told Movistar+.

"Zidane is doing a phenomenal job. He has been doing great.

"The team keeps on getting better, but we need to keep working hard, me and the whole team. The goals are coming naturally, but the most important things is that the team is playing well."

Espanyol were never able to trouble Madrid, but Ronaldo stressed that it did not feel as an easy game for the hosts.

"I don't think it was an easy match. Wins come easier if you work hard," he added.

"We will see what happens when we meet stronger opponents.

"But nothing is easy in my opinion. It only becomes easier if you work hard for it."