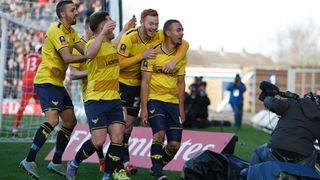 Kemar Roofe insisted he was not surprised by Oxford United's fightback after leading the League Two club to a shock 3-2 FA Cup third-round win over Premier League Swansea City.

Swansea took the lead in Sunday's tie at the Kassam Stadium after Jefferson Montero finished off a well-worked move in the 23rd minute, only for Liam Sercombe to level from the penalty spot shortly before half-time.

Roofe - who is said to be the subject of interest from Newcastle United - then curled home four minutes after the restart and gave Oxford a 3-1 lead by netting at the end of a rapid counter-attack 10 minutes later.

Bafetimbi Gomis pulled one back for Swansea but Oxford held on to progress to the fourth round in memorable fashion.

Roofe told BBC Wales Sport: "It was a great team performance, we stuck to the game plan and it came off, we did really well.

"I can't even remember my goals, the first one was coming in from the left-hand side and I managed to curl it into the bottom corner, then the second was just a great counter-attack."

Asked if he was surprised by the comeback, he added: "We've been doing this all season, even when we go a goal down we have the team spirit to come back."

Manager Michael Appleton said: "I thought the performance was outstanding, it was always going to be a difficult game against a Premier League side.

"He's [Roofe] done ever so well this year - we're very used to seeing goals like his first one in many games this year.

"It's fantastic to be in the draw for everyone here. If we have an opportunity to get another big Premier League team, that would be great.

"Using half the gate receipt for transfers will be a big boost to the club and I'll be reminding the chairman about that and if he wants to do that in the next round I'll certainly comply.

"This is reward for everyone at the football club but it's really important to gain promotion and if we can improve on the squad it will stand us in good stead.

"I'm not worried about people coming in for our players, you've got to take it in your stride and the club want to bring players in who can go on and improve themselves.

"But I don't think there are many players that want to leave just now."