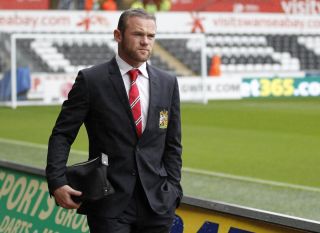 The striker has been subject two transfer bids from Chelsea during the close-season, and his apparent desire to leave the Premier League champions had seen him isolated at the club.

His stance saw manager David Moyes make him train alone, but hamstring and shoulder injuries also saw him miss out on the club's pre-season campaign.

Rooney started and played for over an hour as England beat Scotland on Wednesday, and was a second-half substitute in United's opening-day win over Swansea City.

The 27-year-old was involved in the final two goals of Saturday's 4-1 victory - although he was pictured not celebrating with his team-mates - and insisted he was only focused on getting back to full fitness.

"You obviously need that sharpness," he said after the triumph at the Liberty Stadium. "I haven’t had that many training sessions with the first team (at United) because they have been away (touring Asia).

"I might be lacking that bit of sharpness but hopefully that will come. I need to try and get a few more games in.

"You always look forward to having a good pre-season. It’s important you do that. Unfortunately I got the injury to my hamstring and then to my shoulder. It’s been disappointing but you’ve got to deal with it.

"I have been working hard on the training ground trying to get myself fit and I was just thankful to get the minutes in against Scotland. That’s thanks to the manager (Roy Hodgson)."

Meanwhile, Moyes was pleased with the impact Rooney had as a substitute against Swansea and reiterated his desire to keep the player at the club.

"He came on and made a great run for the (Robin) van Persie goal and played Danny (Welbeck) in for his goal so it's good for Wayne to get those minutes on the pitch," the Scot told MUTV.

"He's not ready yet physically and has not done enough in training.

"When he came on, he showed what a good player he is. Everybody wants those players in the team and we're delighted to have Wayne playing."