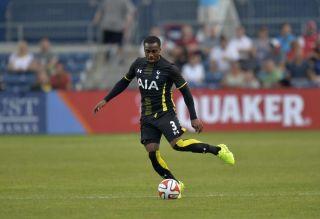 The 24-year-old came through the youth ranks at Leeds United before switching to White Hart Lane in July 2007.

Rose subsequently had loan spells at Watford, Peterborough United and Bristol City before he enjoyed a temporary stint at fellow Premier League club Sunderland in the 2012-13 season.

He made 27 Premier League appearances at the Stadium of Light club before returning to Tottenham last term, where he featured on 22 occasions in the top flight.

"We are delighted to announce that Danny Rose has committed his future to the club with the signing of a new five-year contract," Spurs announced on their official website.

Rose started his career as a winger but has successfully transitioned to a left-back role.

The former England Under-21 international has made 59 appearances for Tottenham and scored three goals.

Rose will face competition for a starting berth next season after Tottenham completed the signing of Ben Davies from Swansea City earlier this month.

Head coach Mauricio Pochettino has also drafted in Michel Vorm from the Welsh club, while Southampton duo Morgan Schneiderlin and Jay Rodriguez have been linked with a move to the club.