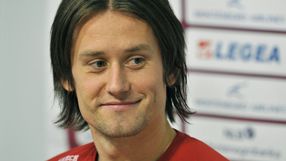 The Czech Republic international has been a Gunner since 2006 and made 115 appearances in that time.

He has flitted in and out of the starting line-up, largely due to an 18-month absence with a hamstring injury, on numerous occasions at Emirates Stadium.

However, recently the 31-year-old has been in scintillating form and was rewarded with a new contract back in March after a number of key performances.

And Rosicky now feels that he has found his ideal position, telling the club's official website: "I'm in the advanced position of the three, looking to get in between the opposition's midfield and defence.

"When we have the ball I'm starting quite close to Robin up front, and after that I can come a bit deeper and stretch the pitch out.

"I can't say for sure whether this has made the whole difference, but I would certainly agree that what the boss is asking [of me] at the moment suits me nicely."

Rosicky was injured at the beginning of this season, and many critics wondered whether he would ever live up to expectations in the Premier League.

But this season he has rekindled the sort of form that brought him to the Gunners for just under £7 million.

"The whole season has gone quite well for me, but I was injured twice in the first few months so couldn't keep up sustained form. I'm enjoying the rhythm the manager has given me now," he said.

Rosicky insisted he is not adopting a different approach to matches, but expressed his comfort in the current side.

"My preparation for games and training has not altered at all, it's the same as it has ever been," he said.

"Sometimes you can look at a player and see that he's suddenly doing this and that and it's making a difference, but that's not the case here.

"So if you ask why things are going well, it's hard to say - obviously the whole team is playing very good football at the moment and I think I fit quite well into the team now. We enjoy playing together and that's a big part of it."