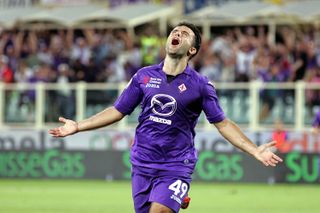 First-half goals from Giuseppe Rossi and David Pizarro sandwiched Pablo Barrientos' effort to hand Vincenzo Montella's side a winning start to the new Serie A campaign.

Rossi opened the scoring in the 14th minute when he placed home from eight-yards after meeting Juan Cuadrado's cutback.

Sebastian Leto then came close to the equaliser when his header was saved by Norberto Neto.

But Catania did draw level in the 22nd minute when Barrientos found the bottom corner with a left-footed strike from inside the area.

They were unable to build on that momentum, however, and Fiorentina were back in front just six minutes later.

Pizarro worked his way to the right hand side of the box before unleashing a fierce drive that found the top corner.

It means Fiorentina have now won 12 and drawn five of the 17 home top-flight matches they have played against Catania.

Montella's men sit in sixth position after the opening weekend of fixtures in Serie A and continue their season with a trip to Genoa on Sunday, while Catania will look for their first points when they welcome Inter.