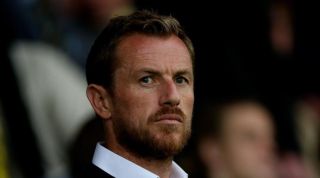 Former Birmingham defender Rowett had been at Burton since 2005 - initially joining as a player before going on to serve as assistant, caretaker and manager at the club.

During his time as permanent boss at the Pirelli Stadium, Rowett achieved two play-off finishes - reaching the final at Wembley last term before losing out to Fleetwood Town.

He takes over a Birmingham side at a low ebb, after they were hammered 8-0 at home by Bournemouth on Sunday under the guidance of caretaker boss Malcolm Crosby.

The 2011 League Cup winners have won just once at home in the league in the past 12 months - a dismal run which saw Lee Clark sacked last week.

Birmingham director Panos Pavlakis told the club's official website: "I'd like to formally welcome Gary ahead of the start of a new era for Birmingham City Football Club and I trust all supporters will join me in giving their full backing to our new manager and his backroom staff.

"The board fully understands supporters' frustrations during what has recently been a very difficult period for the football club.

"As a result, the board will endeavour to improve communication with our loyal supporters moving forward."

Burton chairman Ben Robinson was happy to wish Rowett well in his role at St Andrew's.

"After the success Gary has achieved at Burton Albion over the last three years it was inevitable that there would be interest from other clubs," Robinson said in a statement.

"Gary is an ambitious young manager and the offer from one of his former clubs playing Championship football was one he wanted to take. We wish him well and thank Gary and his coaching team for what they have done for the club."

Head of Burton's academy Mike Whitlow will take control of first-team affairs on a caretaker basis initially until Rowett's replacement is appointed.

"We will start the search for Gary’s successor immediately and know we will attract a lot of high calibre applicants for what is a very attractive job," Robinson added.