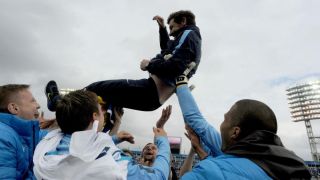 Andre Villas-Boas led Zenit to their first Russian Premier League title in three years after a 1-1 draw with Ufa on Sunday.

Hulk's 15th goal of the league campaign set the leaders on their way just after the half hour, and although Haris Handzic levelled with three minutes to play, the point was enough to seal top spot due to their better head-to-head record with Krasnodar.

"We have a very good club and we have great players and I think that we have separated ourselves from our opponents, "he said after watching his side extend their unbeaten run to 13 games

"We have had different kinds of matches, we started very strong and broke some records and had seven wins in a row. We beat all of our main rivals, [and] we have beaten them at home and away."

In the end, the head-to-head record did not matter as Krasnodar were held 2-2 by Torpedo Moscow, leaving them eight points behind Zenit with two to play, while Torpedo's survival hopes remain alive.

CSKA overtook their rivals after a 4-0 win over Spartak Moscow, with Roman Eremenko scoring twice to guarantee European football for Leonid Slutsky's side.

Krasnodar are also guaranteed a top-five finish, but the remaining two places are up for grabs after Rubin Kazan and Dinamo Moscow both lost.

Goals from Mbark Boussoufa, Roman Pavlyuchenko and Alexander Samedov gave Lokomotiv Moscow a 3-0 triumph over Rubin to stay in contention for a European spot, while Ural came from a goal down to beat Dinamo 2-1.

Ural's win - sealed by Fyodor Smolov - moves them to within a point of safety at the bottom, with six teams still in the battle to avoid relegation.

All six picked up points in the latest round of games, with Amkar Perm leaping out of trouble with a 1-0 success over Kuban Krasnodar.

Torpedo's point leaves them five points from safety, while draws for Rostov and Arsenal Tula against Mordovia Saransk and Terek Grozny respectively gives them hope.