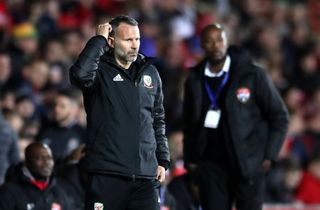 Ryan Giggs explained he had no choice but to disappoint Wales fans by leaving Gareth Bale out of the side that beat Trinidad & Tobago at Wrexham.

Wales had not played at the Racecourse Ground since 2008 and much had been made of the national team’s return to the north for the first time for 11 years.

But Real Madrid striker Bale was among those missing as manager Giggs fielded a shadow side just four days before Wales’ opening European Championship qualifier against Slovakia in Cardiff.

“Gareth got his first 90 minutes in three months and took part in a little bit of training on Monday,” Giggs said after 19-year-old Ben Woodburn’s stoppage-time strike gave Wales a 1-0 win over the Soca Warriors.

“He trained this morning really well, but it was just too much of a risk with Sunday in mind. That was the case with a few of the players.

“We have the advantage in this first game. Slovakia play Thursday then Sunday, it’s a two-and-a-half-day turnaround.

“I wanted to make sure that we made that advantage count this week, both physically and mentally.

“Of course it’s disappointing for the fans. They want to see the likes of Gareth, but it’s my job to make sure we are ready for Sunday.”

George Thomas went close with a stinging second-half shot and saw his header midway through the second half ruled out for offside.

But Wales had made little headway until Liverpool teenager Woodburn sent the 10,326-capacity crowd home happy with his second international goal, chesting home debutant Will Vaulks’ cross from a few inches out.

“The performance, first half especially, I was really pleased with,” said Giggs, whose side had been upset in their previous game by Albania.

“We had a couple of days to work on a few things and felt we did that first half without that final-third composure, making the right decisions and having a bit of quality.

“I was pleased with the first half. Trinidad and Tobago didn’t have anything.

“But I reminded the players at half-time about Albania. It was exactly the same in Albania, so we had to keep that clean sheet.

“We rode our luck a bit in the second half, Trinidad and Tobago made it difficult for us. We just had to be patient.”

Trinidad & Tobago manager Dennis Lawrence felt his side were unfortunate to lose.

“We were very unlucky, I don’t think the boys deserved that,” Lawrence said.

“It was a good workout for us, but they were very comfortable on the ball.

“I was a bit surprised Gareth didn’t play.

“I thought they would have wanted the fans to get the opportunity to see him, but they made the decision that was best for Wales and for Gareth.”