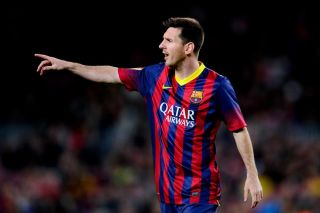 Messi has faced criticism in recent weeks after falling well below his usual extraordinary performance levels for Barcelona, notably in the UEFA Champions League quarter-final defeat to La Liga leaders Atletico Madrid and the 2-1 loss to rivals Real Madrid in the Copa del Rey final.

The 26-year-old silenced the doubters to an extent after his match-winning goal secured a come-from-behind victory over Athletic Bilbao at Camp Nou on Sunday.

However, Barca still trail Atletico by four points with four games remaining, and Messi has bared the brunt of the criticism aimed at Gerardo Martino's men.

Sabella is unperturbed by those criticisms, however, and is confident Messi can shine in front of the world audience when Brazil hosts the World Cup later this year, providing his team-mates provide the right assistance.

"Messi is fine but we must try to be the best possible team to help him," Sabella said.

"We have to get the team to be more compact, occupy the spaces.

"Messi has matured as a person, he has interior peace, but we have to create a climate that will allow him to be happy, I think we have to let him be calm."