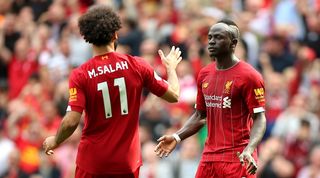 Sadio Mane insists his fall-out with Mohamed Salah during last month's victory over Burnley has been "forgotten".

Mane reacted badly when Salah did not pass to him during Liverpool's triumph at Turf Moor.

Both players were on the scoresheet in Saturday's 3-1 defeat of Newcastle, and Mane insists they have put the incident in Lancashire behind them.

"With Salah? It's forgotten," he told Canal+. "These are things that happen in football. Sometimes you have to say things face to face.

"Sometimes it happens that I am not given the pass. But we have reconciled and become the good friends we were before."

Liverpool's next encounter sees them travel to Napoli in the Champions League on Tuesday.