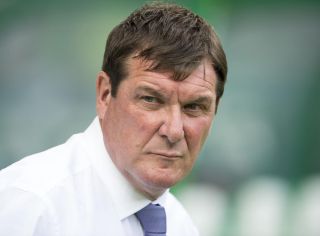 Tommy Wright is at a loss to explain how St Johnstone can go from the highs of their comeback success against Hibernian to the lows of defeat at home to Kilmarnock.

Coming after their second-half recovery sealed the same scoreline against Livingston the previous week, Saints – boosted by the return of fan favourite Stevie May – approached the visit of Killie with confidence.

However, they succumbed to a dispiriting defeat that consigned them to the foot of the Ladbrokes Premiership table after Scotland full-back Stephen O’Donnell forced in the only goal of a 1-0 win for the visitors five minutes from the break.

And, with just one win in eight competitive matches this term, Wright admits he is not sure what is affecting Saints at McDiarmid Park.

He said: “I’m frustrated and I’m at a loss how they can go from where they were last week, dominating possession. The tempo to our play was way below what I was expecting in the first half.

“We don’t start well at home.

“(The Kilmarnock winner) was a counter-attacking goal that we should have prevented. It’s poor from us.

“In the second half, I thought we were much better in terms of possession. They dropped deep and tried to make it difficult and were a danger on the counter.

“But we probably didn’t create enough with the possession we had to get anything out of the game.”

May made his second debut for his hometown club as a second-half substitute following his return from Aberdeen five years since leaving for Sheffield Wednesday.

The 26-year-old failed to spark a comeback but Wright, who was also delighted to welcome back Drey Wright after nine months out with a knee injury, is confident the striker will prove to be an important acquisition.

He added: “He had a slight groin problem so we weren’t sure up until the last minute whether we were going to play him or not.

“He got on the end of a couple of things and he’s had a couple of shots, so I think you can see he’ll be good for us.”

Kilmarnock arrived sitting bottom of the Premiership but left buoyed by a first league victory for under-pressure manager Angelo Alessio.

The Italian said: “I am very happy, because it’s the first win. My team played very well.

“Playing away against St Johnstone isn’t easy but everyone played well. We deserved this result.”