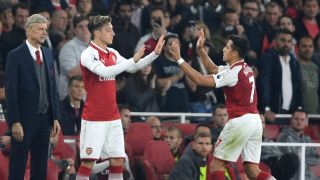 Alexis Sanchez and Mesut Ozil could leave Arsenal in January if they cannot agree on contract extensions, Arsene Wenger has admitted.

Under their existing terms, key duo Sanchez and Ozil will be free agents at the end of the season and doubts over their respective futures continue to linger.

If no agreement is reached before the next transfer window, Wenger conceded the Gunners could be forced to cut their losses and sell up.

"In our situation, we have envisaged every solution. It is possible," said the manager, who confirmed no deadline has been set for a decision to be made.

Ozil's agent Erkut Sogut said talks with Arsenal were "going in a positive way" this week, and Wenger affirmed that view.

While the Frenchman confessed a conclusion to the negotiations remains a long way off, he is hopeful they will reach a positive conclusion.

"It is my understanding [that he wants to stay]," said Wenger of the Germany international.

"I always said that when we didn't find an agreement last year that doesn't necessarily mean that the player will leave.

"Both players are happy here. I hope the situation can be turned around.

"At the moment, we are not close enough to announce anything."