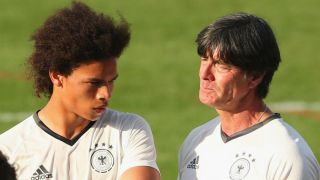 The 20-year-old winger joined City for a reported £37 million during the close-season after a breakthrough campaign in the Bundesliga with Schalke made him one of the most sought-after young players in Europe.

Some suggested Sane might end up getting lost amongst the attacking talent at the Etihad Stadium and subsequently hurt his international standing, but Low believes Guardiola is the ideal man to nurture his talents.

"With Pep Guardiola we know that he has taken care of young players," he told RND.

"He does not burn them out and operates with them with clear analysis.

"There is a clear plan for Leroy."

Unlike Sane, Borussia Dortmund's Gonzalo Castro missed out on a call-up to Low's Germany squad for the upcoming World Cup qualifiers against Czech Republic and Northern Ireland, resulting in his club coach Thomas Tuchel publicly venting his disappointment.

Low was quick assure Castro and Tuchel that the energetic midfielder is very much in his thinking, though.

"We have him [Castro] back in the spotlight," he added.

"He wasn't for a while because he seemed to stop in his development, but now he is doing what is needed at the highest level.

"He always gets into attack and often has a decisive say in the conclusion [of attacks]. But the competition is enormous."