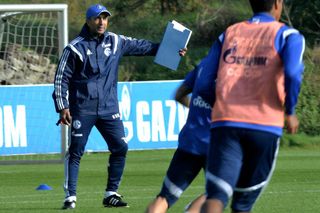 The Italian replaced Jens Keller earlier in October after Schalke's slow start to the Bundesliga campaign, which saw them win just two of seven games to sit 11th.

Di Matteo said it had been difficult with several players away on international duty, but he likes the look of his attack.

The former Chelsea manager said improved organisation would be the key when his side face Hertha Berlin on Saturday.

"I watched some of Schalke's matches and got some ideas," Di Matteo told a news conference.

"I think the attacking potential of the team is very big, but we have to improve our organisation."

Di Matteo is urging Schalke to focus on the collective, despite the individual quality within their squad.

"As I said, it's always about the team. The players have to work for the team," Di Matteo said.

"In the squad there are some key players who have to help the team and give all their quality to the team and not just to themselves as an individual.

"There are many players in our squad, not just Julian, Kevin or Benni [Howedes]. It's all about the team and not just single players."