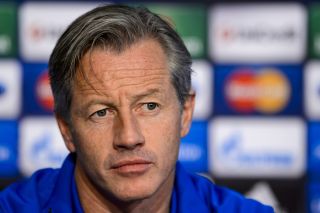 Basel stunned Chelsea 2-1 in London on the opening Champions League matchday, coming from a goal down at half-time and scoring twice in the final 20 minutes.

Keller, who led Schalke to a 3-0 win over Steaua Bucharest in the first round of the Champions League group stage, has claimed he knows exactly what to expect from Murat Yakin's team, although he has warned his players that Basel can adapt their tactics throughout a match.

"We're playing away and Basel have won in London so I think that Basel are favourites but nothing can change as quickly as football," Keller told the UEFA website.

"I met Murat Yakin in Nyon (at the UEFA Elite Club Coaches Forum) and we exchanged our tactical (ideas).

"I told him how we will play and he told me how Basel will play, so there will be no big surprises. We know exactly what will happen.

"The strength of FC Basel is that they can play with different tactics, they can change their tactics during the match a few times. We saw that against Chelsea and it was impressive."

Keller says he is 'optimistic' German midfielder Julian Draxler will be available to play for Schalke after the 20-year-old missed his club's 3-3 draw away to Hoffenheim in the Bundesliga on Saturday.

Draxler set up a goal and scored another for Schalke in their victory over Steaua on September 18.

"Valentin Stocker is a very good player with great qualities but we have some good players too," Keller said.

"Against very good players you have to defend as a team and not just one on one."