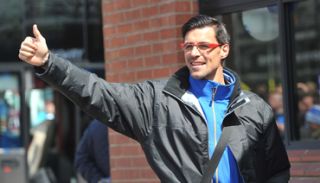 The 33-year-old former Austrian international won his domestic cup, and completed a league double, with Austria Vienna in 2003 and won the Norwegian Cup with Brann Bergen in 2004.

He would like nothing more than a third winner's medal on Saturday - especially as he threw the runners-up medal he got after Wigan lost 4-0 to Manchester United in the 2006 League Cup final into the crowd after the game.

"I won the cup in Austria and in Norway and England is my third country so it would be the perfect thing to win it in England as well," Scharner, who is on loan from SV Hamburg, told BBC Radio Manchester as Wigan prepared for their first FA Cup final.

After confirming that he expects to return to the Bundesliga at the end of the season, Scharner recalled how he felt at the end of Wigan's only other major final when they were well beaten by United.

"I was so angry that we lost, but to be honest, Manchester United were on a high.

"Cristiano Ronaldo was on a very good spell and it would have been very difficult to get something from that game.

"I got a response from the fan who caught the medal a couple of months later and it was really nice to read the card. I think he's happier with the medal than me," he said.

Scharner played 40 times for Austria before falling out with the management last year and brings an extra dimension to Wigan as he can play in almost any position, although he is usually deployed in defence or midfield.

He stands out on the field for another reason: his hair.

"I don't have scandals and I don't fight in bars, so I decided the simplest way to get some attention was coloured hair. The first time I did it was when I was 22 and since then I've had about 12 different haircuts and colours," he said.

"It's something people can talk about and smile about. Football is entertaining and people pay a lot of money to see us playing on the pitch, so you have to give something back."

The cup final is one of two targets Wigan have this season. The other is avoiding relegation from the Premier League.

They are three points from safety with two matches to play and their last two games are at Arsenal and at home to Aston Villa.