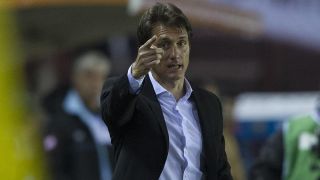 Palermo have appointed their third coach of the Serie A season, naming Guillermo Barros Schelotto to replace Davide Ballardini.

Ballardini came under-fire from his players after being accused of not interacting with them during their 1-0 win over Hellas Verona on Sunday.

The 52-year-old Italian was sacked just months into the job, having replaced Giuseppe Iachini in November.

Palermo announced Schelotto, a former Argentina international whose only previous coaching job was in charge of Lanus, had taken over on Monday.

"Guillermo Barros Schelotto is the new coach of Palermo," the club said in a statement.

"The Argentine will be assisted by Fabio Viviani, who, during the week started training the first team.

"The rest of the coaching staff will be announced in the coming days."

Palermo sit 16th in Serie A, six points clear of the relegation zone.