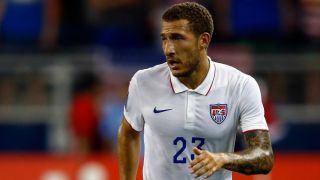 Johnson was dismissed from the USA's squad prior to their 1-0 international friendly loss to Costa Rica on Tuesday following "severe" words with Klinsmann.

Klinsmann reacted angrily to Johnson's request to be substituted in the 111th minute of USA's 3-2 extra-time defeat to Mexico in last week's 2017 Confederations Cup play-off.

Johnson had complained of muscle tightness, but Klinsmann claimed the 27-year-old was not injured.

Schubert hit back on Thursday, telling reporters: "Fabian has a thigh problem, but I'm assuming that he will be available in Frankfurt.

"We won't know that until tomorrow either though. I can vehemently deny everything that has been written and said about him recently.

"I know Fabian to be a top professional who has a great mind-set when it comes to the team, his job and his health.

"When a player feels a tightening of their thigh in added time in a game and could then be on the verge of a more serious injury, I only think it's the responsibility of the team and himself to have him subbed off."

Gladbach are away to Eintracht Frankfurt in the Bundesliga on Saturday.