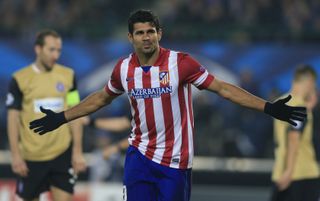 The Atletico Madrid striker has won two caps for Brazil, but is thought to want switch allegiances and represent Spain.

Costa has dual-nationality after spending more than five years in Spain and qualifies to play for the world and European champions.

Spain head coach Vicente del Bosque has made no secret of his desire to select Costa, but Scolari is eager for the in-form forward to represent the country of his birth.

And the 64-year-old reiterated his admiration for Costa, revealing that he intends to pick him for their international friendlies with Honduras and Chile next month.

"I'm going to call him up for the matches on 16th November in Miami and 19th in Toronto," Scolari told Spanish radio station Cadena Cope.

"I did not speak to the player, but I spoke with Jorge (Mendes, his agent) and I asked him if the player wanted to talk with us, because we received the reports that Spain want to call him up.

"If I were to choose the squad for the World Cup today, Costa would be on the list. I love him. He's first on the list. I have a second and I have to look for a third."

Costa has scored 12 goals in all competitions for Atletico this season.