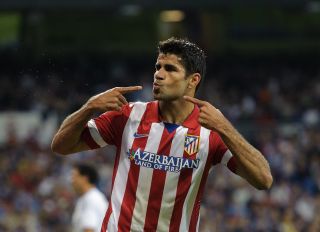 Costa's international future has been subject to much conjecture, with Brazil and Spain both declaring their intention to select the 25-year-old, who qualifies for both teams via dual-nationality.

The Atletico Madrid striker ended the speculation on Tuesday, though, signing a letter to the Brazilian Football Confederation (CBF) confirming his intention to switch his allegiance to the world and European champions.

Scolari had selected Costa, who has won two caps for Brazil, for their friendlies with Honduras and Chile next month.

However, the forward has now been withdrawn from the squad, with Scolari criticising Costa for "turning his back on a dream of millions" by choosing to reject Brazil ahead of the 2014 FIFA World Cup, which is to be staged in the South American country next year.

"A Brazilian player who refuses to wear the shirt of the Brazilian national team and compete in a World Cup in your country is automatically withdrawn," Scolari said in a statement.

"He is turning his back on a dream of millions, to represent our national team, the five-time champions in a World Cup in Brazil."

The CBF have yet to reveal whether they will launch an appeal over Costa's eligibility to play for Spain, although the organisation's president Jose Maria Marin has previously promised to "fight" for the player.

Costa has scored 13 goals for Atletico so far this season, a run of form that has seen the Spanish capital club rise to second in La Liga.