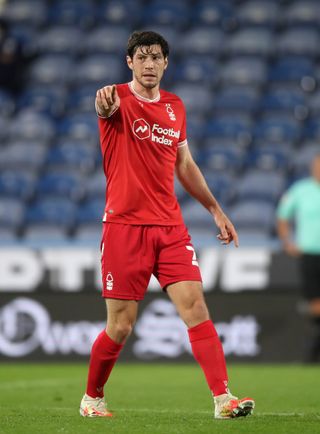 Forest are still searching for their first points and goals of the Sky Bet Championship season and, after a frustrating finish that saw them surrender a play-off place last term, pressure is growing on manager Sabri Lamouchi.

Yet Scotland international McKenna, who made his debut following his move from Aberdeen in last week’s loss at Huddersfield, insists there are no signs of confidence being low.

Saturday sees them host the Robins, who have conceded just one goal in winning their opening three matches – their best start to a campaign in 19 years.

Defender McKenna said on the club’s website, nottinghamforest.co.uk: “They have taken nine points from nine, which is a great start to the season, but from what I have seen of the Championship before I came down, anyone can beat anyone and there is absolutely no reason why we can’t take all three points if we put in a good performance.”

City boss Dean Holden is taking nothing for granted against what he believes is a dangerous side.

Holden said: “They’re a good team. They haven’t scored a goal or got a result but, plus a cup game, it’s only been four games.

“They have front players who can cause any teams damage if you allow them to so there’s that to take care of, as well as ourselves guarding against complacency.”

Another manager without a win and under fire is Derby’s Phillip Cocu, who takes his side to pre-season promotion favourites Norwich on the back of a 4-0 loss to Blackburn.

“We do not need to look back,” said Cocu, for whom new signing Jordon Ibe is not yet ready to feature, on Rams TV.

“We need to look forward. We have a quality team and we still have our goals for the end of the season, but we still have some work to do.”

Elsewhere promoted Wycombe, still looking for their first points, travel to Luton and Reading put their 100 per cent record on the line at home to unbeaten Watford.

Swansea, who are also unbeaten, host Millwall and Blackburn take on Cardiff. Middlesbrough and Barnsley, two other sides seeking their first wins, face each other at the Riverside Stadium and Huddersfield head across Yorkshire to Rotherham.

Bottom side Sheffield Wednesday, on minus eight points after being deducted 12 at the start of the season, tackle QPR at Hillsborough.

There are two more games on Sunday with Brentford hosting Preston and Birmingham at Stoke.