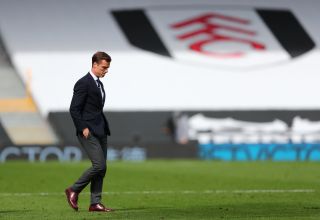 Scott Parker will rotate the squad as the Fulham manager looks to build match fitness and reach the Carabao Cup third round at the expense of Ipswich.

Fulham now head to Portman Road looking for victory against Paul Lambert’s League One side in the Carabao Cup second round – an encounter Parker intends to make changes in.

Alphonse Areola, Mario Lemina, Kenny Tete, Ola Aina and Antonee Robinson have yet to make their debut since their summer arrivals, while others left out of the line-up against Arsenal need minutes.

“It’s a competition that we respect,” Parker said. “A good cup run, we know that that can build confidence and momentum.

“And also, at the same time it helps in terms of getting players minutes and getting players up to speed, those who haven’t been with us too long or haven’t played a lot of football or trained a lot due to the circumstances of having such a short pre-season.

“But as much as we want to get minutes into the boys to get them up to speed, we also want to go and win the game.

“We want to stay in the competition and hopefully be successful in it.

“Winning is the most important thing. Every time you play a football match, you want to win.

“It’s an opportunity for us to win a game, which is what we plan to do every game this year.

“We understand we’re not going to be able to do that every week, but our ambition is to try and win football matches, so this gives us a good platform to try and do that and then build from it.”

Fulham’s side is bound to be full of quality despite his planned changes on Wednesday when Parker will not allow complacency to seep in against third-tier opposition.

“They’ve got a good manager, an experienced manager in Paul, and a team which has some good young talent in there, mixed with some good experience with the older pros,” he told the club’s website.

“They’ve got all the dynamics to do very well this year. They’re a good side who try and play the right way, so it’s going to be a tough game for us.

“They try and play football, they like to get the ball down. They’ve got technical players, players who like the ball on the floor.

“And like I said, they’ve got a good blend of talented younger players alongside some older, more experienced players in (Luke) Chambers and people like that.”