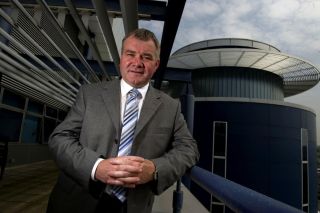 Tributes have been paid after John Fleming, Scotland’s head of referees, died at the age of 62.

The Scottish Football Association announced that its head of referee operations had died after a “prolonged illness”.

Fleming was a former FIFA-listed match official who worked as an assistant referee at Euro 96 and led the SFA’s referees department for the past eight years.

He was also a UEFA referee observer and was on the technical advisory panel of the International Football Association Board, the game’s law-making body.

An SFA statement read: “He was a respected member of the association’s senior management team and beloved by the refereeing community, among whom his loss will be felt most profoundly.

“Although his role came with public profile, John was a private man who drew strength from his continued commitment to refereeing even while in ill health.”

SFA president Rod Petrie added: “John was a private man and many people will be shocked to learn of his passing after an illness borne with fortitude.

“His commitment was unstinting to the game, his refereeing colleagues and the association.

“He worked tirelessly in support of his match officials, whom he considered an extended family.

“He undertook his responsibilities as head of referee operations with passion and integrity, qualities that met with respect across the game: in boardrooms, in dressing rooms and, of course, in referees’ rooms.

“John was a dedicated family man and suffered the loss of his wife Ann with the love of his children Dawn and Graham, and of course his grandchildren Anna, Charlie and Rose, on whom he doted. Our thoughts are with his family.

“I know I speak on behalf of the board, John’s friends and colleagues within the Scottish FA, the referee community and clubs across the country in saying that we will miss a trusted colleague, a man of honour and principle, and a dear friend.”

Motherwell chief executive Alan Burrows wrote on Twitter: “I am so sorry to hear this news. John was always open, direct & would take your calls, normally when you were feeling sore about something.

“He battled admirably against illness & it’s tragic he is now gone at 62. My condolences are with John’s family & friends at this sad time.”

Hibernian added: “The thoughts and prayers of everyone at Hibernian Football Club are with the family, friends and colleagues of John Fleming – who was a dedicated servant to Scottish football.”