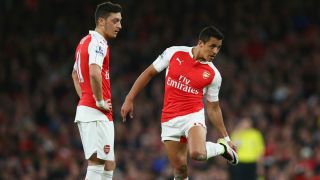 A 13-match unbeaten run since their opening-weekend defeat to Liverpool sees Arsenal lying second in the Premier League, three points behind leaders Chelsea.

Victory over Basel in midweek secured qualification to the Champions League knockout stages as Group A winners, with Sanchez and Ozil central to the good fortunes of Arsene Wenger's men this season.

With a genuine chance of a first Premier League crown since 2004, Seaman - who won three titles with the Gunners - has urged the club to spend whatever is required to keep the duo happy.

"To win the title Arsenal have got to keep their best players," he said, in quotes reported by the Mirror. "We used to do that. When big clubs came calling for Thierry Henry or Patrick Vieira, we always managed to send them packing.

"But then the club went through a phase of selling them, although maybe that was partly because finances forced our hand.

"Now they are in a situation where they have a great chance of winning the Premier League for the first time in 13 years and they don't need to sell.

"The Emirates Stadium is paid for, the bank manager is happy, so if it means paying Sanchez and Ozil what they are worth - or perhaps even a little bit more - just do it.

"If Arsenal lost Sanchez now, they would have to spend a colossal amount of money, maybe £50-60million, to bring in a replacement of his quality.

"Why not just go the extra mile to keep him and Ozil at Arsenal? They are special players, and it's special players who make the difference between winning the major trophies and coming close.

"People talk about breaking the wage structure and upsetting the applecart, but in the dressing room nobody will complain if the club accommodates a couple of higher earners who are in that 'special' bracket and they deliver the title.

"Arsene must make sure that if either of them leaves - and all the supporters hope it doesn't come down to this - it must not be for financial reasons.

"I'm all for good housekeeping, but sometimes in football you've got to push the boat out a bit further. You have to stay ambitious."