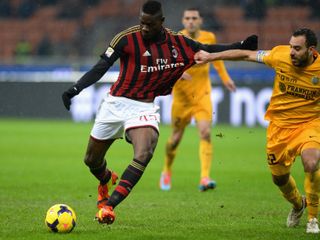 Balotelli scored an 82nd-minute penalty at San Siro on Sunday to seal a 1-0 win over Verona, as Seedorf's first match as a coach ended in victory.

The former Manchester City forward was a livewire throughout and his work-rate delighted Seedorf, who spent 10 years at Milan as a player before taking the reins this week.

"I already knew Mario and am not remotely surprised by the good rapport we've built over the last few days," Seedorf told Sky Sport Italia.

"He's a sweet guy, a great talent and will do very well for Milan and Italy.

"I hope to help him grow and he has already shown he's willing to play a part in this project."

Seedorf opted for a 4-2-3-1 formation, a set-up that saw Balotelli aided by Kaka, Robinho and Keisuke Honda.

Milan dominated the first half, pressing Verona with intensity, and although they faded after the break, Seedorf saw several positive signs.

"The first half was very good, whereas after the break, fatigue set in," the Dutchman added.

"I liked the pressing as soon as we lost the ball and keeping the defence very high.

"We haven't had much time to work over the last few days, but the players did very well to keep that pressing up and pin Verona into their own half for the first 45 minutes.

"This victory came at the end with a penalty, but I still believe it was deserved considering the performance over 90 minutes."

Balotelli dedicated victory to the new coach and felt Seedorf's system worked well as Milan climbed to 11th in the table.

"It is a victory we all dedicate to Seedorf, as it's his first game and obviously that's the most difficult," Balotelli said.

"We put ourselves in a tough situation and were forced to win this match. We organised it well and got the result.

"We had practically four forwards on the field and he told us to put the pressure on straight away. It worked, as we kept winning back possession in their half. I think we played well.

"I like that role (playing as a lone striker) and it'd be even better with more balls coming my way. We hope it can be the turning point."