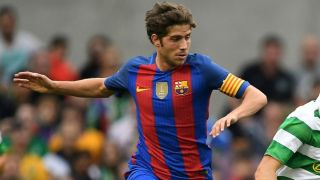 After 31 league appearances for Barcelona last year, Sergi Roberto looks set to reclaim a number of important roles for the LaLiga champions as coach Luis Enrique lavished the versatile defender in praise following their 3-1 win over Celtic.

The International Champions Cup clash was Barcelona's first of the pre-season and Roberto was one to impress, proving his versatility once again performing a number of roles on Saturday.

Goals from Arda Turan, Munir El Haddadi and an own goal from Celtic's Efe Ambrose was enough to seal the win for Luis Enrique's men, but it was Roberto who he gave particular mention to.

"He was as marvellous as ever. He's more than a player because he does well wherever I ask him to play," Luis Enrique said.

Roberto himself was pleased with his contribution, adding: "We played well and that's the way we need to carry on. I thank the boss for his words, and for giving me these chances. Now I have to work hard all through the preseason to get ready for the start of the campaign.

"Competition is healthy and we have to enjoy this preseason. The whole team played well, and the youngsters did really well considering so many were playing their first games."

The Barcelona coach made a number of half-time changes as Aleix Vidal was the only player to complete the full 90 minutes.

Luis Enrique afforded Denis Suarez his Barcelona debut upon his return to the club and the ex-Villarreal midfielder was delighted to get on the park.

"It felt very good. We were up against a fine opponent who are already into their rhythm," he said. "I felt comfortable in both positions, on the left and the right, and with the best player in the world on the field [Messi], everything is so much easier.

"I'm really happy to have made my debut, because I'd waited so long for this moment to come. I know it wasn't an official match, but I'm delighted all the same."