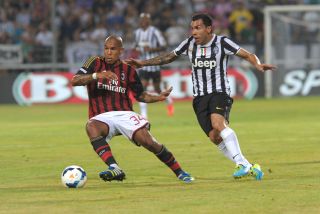 Antonio Conte's men are one of four sides yet to lose in the league in 2013-14, but they face a Milan side who have been defeated just once in all competitions since their opening-day reversal against Hellas Verona.

Juventus have won their last three league games, following up their derby success over Torino with a hard-fought 2-2 draw against Galatasaray in the UEFA Champions League on Wednesday.

Carlos Tevez is currently Juventus' joint top goalscorer with three goals in the league and, while he has not hit the back of the net in the last three games, Milan captain Riccardo Montolivo believes he poses a major threat.

"What has really struck me, besides his technical qualities, has been the intensity that he shows getting the ball back. It’s incredible to see how he chases players down," he told Tuttosport.

Montolivo made his return to Massimiliano Allegri's starting XI in the 1-1 draw with Ajax on Tuesday following a muscle strain, although the likes of Stephan El Shaarawy (foot) and Kaka (thigh) remain doubtful as they trained in a group aside from the first team on Friday.

The Italian midfielder also explained that he believes Conte's men remain hungry for success as they search for their third straight Scudetto.

"I don't think they have a full stomach," the Italian international told continued.

"(Against Galatasaray) they went a goal down but still showed their ferociousness to recover. The goal they conceded just minutes after they had made it 2-1 was just one of those incidents.

"If you leave that to one side, we saw the same old Juve. They’ll be aggressive and nasty on Sunday, but so will Milan."

While Tevez is likely to feature for Conte's side, Milan will be without their in-form marksman Mario Balotelli.

The Italian, who has scored five goals in all competitions this season, was sent off in the aftermath of the 2-1 defeat to Napoli on September 22.

While Balotelli has been in impressive form this season, strike partner Alessandro Matri is yet to score for the San Siro outfit since joining from Juve in August.

Matri explained he would celebrate against his former club if he ended his goal drought at the Juventus Stadium on Sunday.

"I think I would celebrate, I don’t think that would be a sign of disrespect," he told La Gazzetta dello Sport.

"Scoring means celebrating for me. I did so against Cagliari so I don't see why I should not against Juventus.

"I have a good relationship with many of the Juventus players, a few have sent me text messages encouraging me because I'm struggling to score.

"Even if they all end the same way – don't score against us."