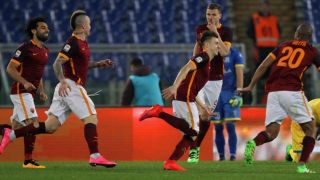 Stephan El Shaarawy marked his Roma debut in style as Luciano Spalletti enjoyed the first win of his second spell in charge with a 3-1 victory over Frosinone.

A prone Radja Nainggolan put the hosts ahead in after 18 minutes with an opportunistic strike but Daniel Ciofani hauled Frosinone level six minutes later.

El Shaarawy, who completed a long-anticipated loan switch from AC Milan earlier this week on the back of a fruitless temporary stint at Monaco, made his debut alongside fellow new recruit Ervin Zukanovic and took centre stage three minutes after half-time.

Zukanovic was the provider with a cross from the left and El Shaarawy pivoted to send a stunning backheel volley beyond visiting goalkeeper Nicola Leali.

There was a stylish third six minutes from time as the returning Francesco Totti came off the bench to play in Miralem Pjanic for an assured finish.

Frosinone remain second bottom and Carpi edged a point further ahead of them in 18th thanks to a 1-1 draw at home to Palermo.

Veteran forward Alberto Gilardino put the away side in front but Carpi substitute Matteo Mancosu won and converted a 74th-minute penalty.

Sassuolo are level on points with Milan in seventh having claimed the same scoreline away at Atalanta, German Denis scoring on his farewell appearance for the home side to quickly cancel out Domenico Berardi's 27th-minute opener - firing home the rebound after Andrea Consigli saved his initial penalty.