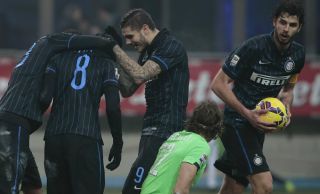 In-form Brazilian striker Felipe Anderson put the visitors ahead after just two minutes and doubled the advantage before half-time.

However, the hosts rallied in the second period as Mateo Kovacic fired in a fierce volley from the edge of the area and Rodrigo Palacio levelled 10 minutes from time.

Sampdoria also had to settle for a share of the spoils when their clash with Udinese finished 2-2 at Luigi Ferraris.

Pedro Obiang put the hosts ahead before goals from Alex Geijo and Danilo put Udinese in front prior to half-time.

However, Manolo Gabbiadini drew Sampdoria back level in the 60th minute.

Udinese were forcing all the action to find a winner - as Geijo hit the post with a header, before they had Thomas Heurtaux sent off late on.

Chievo moved away from the relegation zone as Alberto Paloschi's 81st-minute strike proved the winner in their 1-0 success at Verona.

Torino came from behind to beat Genoa 2-1 at Stadio Olimpico, with Kamil Glik bagging a brace after Iago Falque had put the visitors in front.

Fiorentina and Empoli drew 1-1 at Artemio Franchi, with Juan Manuel Vargas breaking the deadlock just before the break but Lorenzo Tonelli equalised in the 57th minute to earn his side an away point.

German Denis netted twice as Atalanta rallied to secure a 3-3 draw with Palermo on home turf.

Maximiliano Moralez also netted for the hosts after Luca Rigoni's early effort and Franco Vazquez's brace had the visitors on a winning path with a 3-1 lead at the interval.