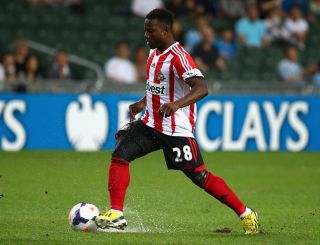 The 29-year-old was pulled over by Northumbria Police on Westgate Road, Newcastle, shortly before 8pm (BST) on Tuesday.

He was subsequently arrested and charged.

A statement from Northumbria Police read: "At 7.51pm on Tuesday August 27 a 29-year-old man was arrested on Westgate Road, Newcastle, on suspicion of drink driving.

"Stephane Sessegnon, of Runnymede Road, Ponteland, has been charged with drink driving and is due to appear before Newcastle Magistrates on October 4."

Paolo Di Canio's side were playing a League Cup fixture with MK Dons at the time of the Benin international's arrest.

Sunderland recovered from a two-goal deficit to defeat the League One team 4-2 and progress to the third round.