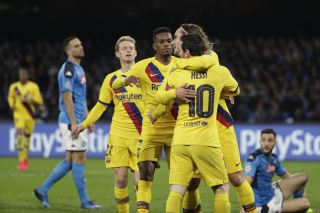 Barcelona coach Quique Setien felt his side had put themselves into a positive position after leaving Napoli with 1-1 draw from the first leg of their Champions League last 16 tie.

Antoine Griezmann struck what could prove to be a crucial away goal for the LaLiga side in the second half, which cancelled out a fine opener from Napoli midfielder Dries Mertens.

The Italians, who had won four of their last five Serie A matches, made the most of a promising start when Mertens curled in a 20-yard effort after 30 minutes.

However, Barcelona, now back top of LaLiga ahead of El Clasico, regrouped for the second half.

Soon after Belgian Mertens had been forced off injured following a heavy challenge from Sergio Busquets, Barcelona equalised when Griezmann lashed the ball in from close range following some slick build-up play.

It was, though, not all good news for Setien after his first Champions League tie as Barcelona boss.

Midfielder Arturo Vidal was shown two quick yellow cards following a tackle on Mario Rui and then pushing his head into the face of the Napoli man during the closing stages.

Busquets’ caution will also see him miss the return tie at the Nou Camp next month. Gerard Pique, meanwhile, limped off during stoppage time after rolling his ankle, which could put the defender out of contention for Sunday’s showdown with Real Madrid.

Setien, however, will remain focused on the bigger picture.

“It’s a positive result for us overall,” he said at a press conference, broadcast by UEFA media.

“We controlled most of the game, but we lacked something in the final third against such an organised defence by Napoli.

“After the equaliser, they opened up a little and we were able to hurt them more. They played very well and it was not easy, so a score draw is fine going into the second leg.”

The Barcelona coach added: “We will have more options in the second leg, as it is unlikely a team will be able to defend for that long at Camp Nou.

“So we have got to think positive and cannot complain.”

Setien accepts Barcelona must now focus on how they can adapt without two key men out through suspension.

“We will not be able to count on Sergio Busquets or Vidal for the return, but we will find solutions to compensate,” he said.

On Vidal’s sending off, Setien commented: “A yellow card for the foul is one thing, but the second is too much. There are moments of tension that players who experience the game with his temperament can have.”

Napoli coach Gennaro Gattuso felt his side had missed an opportunity to give themselves more of a foothold in the tie.

“Barcelona struggled because we were very careful. We did well as a team to play together like this,” he said, as reported by UEFA media.

“I am disappointed because we made one mistake and they made the most of it.

“We suffered tonight, tactically we were almost perfect, but we could have done better and been more clinical.”

Gattuso, though, will take a positive mindset to Spain.

“Our dream at the Camp Nou is to play further up the pitch,” he said.

“It’s not over – it will be difficult, but we’ll go there and try to progress.”