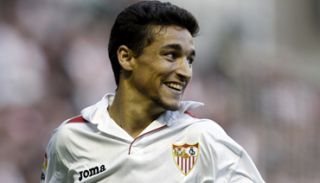 "Sevilla FC has accepted the English club's offer, taking into account the wishes of the player, who will have to pass a medical," Sevilla said on their website.

"Navas... wants to continue his successful sporting career in English football, more precisely at a club at which he can continue to develop as a footballer, as he has publicly stated on various occasions in recent months," they added.

Navas has been tormenting defenders with his electric runs down the right wing since making his top-flight debut for Sevilla in 2003.

The 27-year-old was a key part of the team that won the UEFA Cup in 2006 and 2007 but was unable to take up a place in the Spain squad for many years due to fears about travelling away from his Andalusian home.

He overcame his anxiety to help the Iberian nation win their first World Cup in 2010 and was part of the squad that defended Spain's European crown last year.

Coach Vicente del Bosque typically uses Navas as an impact player who enters the fray late in the game when the opposition defence is tiring.

It was Navas who picked up the ball deep in the Spain half in the 2010 World Cup final against Netherlands and his burst of speed up the line set in motion the move that culminated in Andres Iniesta's winning goal.

Despite his slight frame, he is a tenacious tackler and ball winner but has been criticised at times for a lack of goal-scoring prowess and did not find the net at all for Sevilla in 37 La Liga appearances last season.

He has made 22 appearances for Spain, scoring two goals.