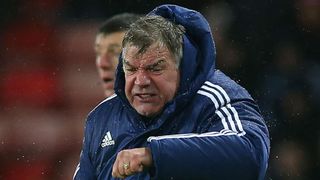 Allardyce is set to be confirmed as Roy Hodgson's successor in charge of the Three Lions, where he will be tasked with picking up the pieces from a shambolic Euro 2016 campaign.

The Sunderland manager, formerly of Bolton Wanderers, Blackburn Rovers and West Ham, represents a departure from previous Football Association appointments, but Shearer feels his sometimes abrasive style could be just what England require.

"One thing you can be sure about with Sam Allardyce is that he will not take any s***," he wrote in the Sun.

"The FA have not appointed a 'yes' man. They have gone with someone who will do things his own way as England boss.

"The England players will definitely respect Sam because if they don't — they will be out. It's as simple as that."

England's selection and tactics under Hodgson became increasingly muddled as their Euro 2016 bid careered towards a galling last-16 defeat to Iceland, but Shearer does not anticipate these failings being repeated under Allardyce.

"I speak to players who have been managed by him and the one thing they all say is how meticulous he is," he explained.

"Our England players in France looked confused, as though they didn't know what they were doing, but that will not happen with Sam in charge.

"He will be so meticulous with his organisation of the side and the system that he wants to play.

"There is no way England would have lost to Iceland at the Euros if Sam was in charge."

Shearer added: "Crucially, I'm confident Sam will also pick players who are in form and are fit.

"Picking crocks and out-of-sorts stars has been a big mistake England have repeated over God knows how many years.

"Another thing Sam has got going for him is that it can't get any worse from what we saw in the summer."