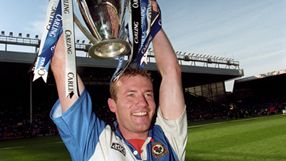 The move to Old Trafford never materialised, with an eventual £3.3 million bid from Blackburn proving enough to test the resolve of Southampton.

GEAR:Save 11% on Man United shirts courtesy of Kitbag. Free delivery on orders over £50

However, Shearer says that a somewhat lackadaisical approach from Manchester United towards bringing him to Old Trafford ultimately proved costly.

In an interview in the 200th issue of FourFourTwo magazine - out now - Shearer revealed that, although there was interest, he felt there was a lack of enthusiasm from the Red Devils towards the transfer.

“There was interest from Manchester United, but I was told I had to wait three or four weeks for them to get the money together. I felt if they really wanted me then they would come and get me immediately,” he says.

"I had already spoken to Blackburn and told Kenny Dalglish, Ray Harford and Jack Walker that I would give them an answer in three of four days – and my answer was yes.”

Shearer enjoyed a four-year stay at Ewood Park, scoring 112 goals in 138 league appearances and leading Rovers to the Premier League title in 1994/95.

In 1996 he was the subject of fresh interest from Manchester United, with Newcastle United also a potential destination.

Sir Alex Ferguson had - at one stage - appeared set to finally sign Shearer after lengthy talks with the striker, only for him to opt for a move to his hometown club for a then British transfer record fee of £15 million.

Shearer hung up his boots in 2006 having scored 206 goals in 395 appearances for the Magpies.

The full interview with Shearer, in which he talks about both captaining and managing England, his trademark goal celebration and turning down Barcelona, can be found in the 200th issue of FourFourTwo - out now - along with exclusive interviews with Dennis Bergkamp, Jurgen Klinsmann, Lionel Messi, Ryan Giggs, Ronaldo and Romario.