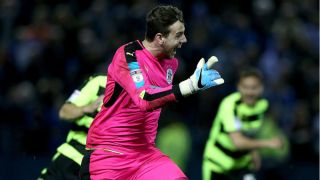 Danny Ward proved the hero for Huddersfield Town as David Wagner's side saw off Sheffield Wednesday 4-3 on penalties to set up a Championship play-off final against Reading at Wembley.

Having drawn 0-0 at home in the first leg, Wagner's men fell behind 51 minutes into a tense return fixture at Hillsborough, Steven Fletcher heading home the opening goal of the all-Yorkshire tie.

Parity was soon restored, however, Tom Lees deflecting the ball into his own net as he attempted to block Nahki Wells' close-range effort.

Wells looked set to complete the comeback in second-half stoppage time, only to be denied by Keiren Westwood.

4 – Huddersfield are the 4th team to reach the play-off final in all three divisions of the (Blackpool, Preston and Swansea). Bound.May 17, 2017

Ward matched Westwood's effort in extra-time, pulling off a fine save to prevent Jordan Rhodes putting Carlos Carvalhal's side ahead before Fernando Forestieri went close, while Wells found the side-netting at the other end.

And Huddersfield's goalkeeper - on loan from Liverpool - stepped up to the mark in the resulting shootout, getting down to his left to keep out Sam Hutchinson's spot-kick to give the Terriers the advantage.

Jack Payne's miss handed the hosts a lifeline, but Ward made sure to spare his team-mate's blushes with a fine save from Forestieri's attempt, putting Huddersfield within one win of returning to England's top flight for the first time since 1972.