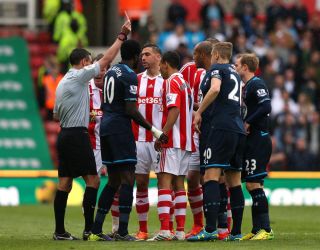 The decision incensed Stoke players and fans alike, with the remainder of the game played out in a tempestuous atmosphere.

Rose was arguably lucky to not be dismissed himself for shoving Geoff Cameron in the chest, with Sherwood moving to diffuse the tension by substituting his left-back soon after.

Though Sherwood did not believe the incident was completely blatant, he claimed referee Andre Marriner had ultimately arrived at the correct decision.

He said: "It was two bookings, what can you do?

"Listen, I like tackling and I don't want anyone to get sent off but it's two bookings.

"The referee had a decision to make and I thought he made the correct one.

"If he hadn't sent him off I wouldn't have been screaming to be honest."