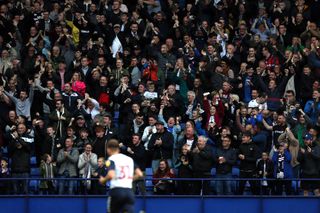 Penalty shoot-out defeats are meant to be heartbreaking. For Bolton, a club on the brink of extinction a week ago, Tuesday night’s was a cause for celebration.

Despite the 4-3 reverse, after a 1-1 draw at home to Bradford, it still felt like a significant landmark for the thousands of fans who flocked to the first home match since Football Ventures’ successful takeover.

It may have only been a Leasing.com Trophy game – the importance of which was highlighted by Bolton fielding the youngest team in their history – but it represented a fresh start for the 9,062 who headed to the University of Bolton Stadium, delaying kick-off by 10 minutes.

Long queues formed outside an hour before the start as hope sprung eternal for fans who have had their fair share of misery over the last couple of years, with the club just hours away from liquidation last week.

That optimism has now been placed on the shoulders of new manager Keith Hill and assistant David Flitcroft – both Bolton born and bred – who made a brief appearance on the pitch before the start.

The pair relinquished managerial duties to former caretaker Jimmy Phillips, who picked a team with an average age of 19 to face a Bradford side who made seven changes.

Bonus point or not, our boys have been fantastic this evening. 👏🏻— Bolton Wanderers FC (@OfficialBWFC) September 3, 2019

“We stopped the rot in a losing sequence of games and we have a new manager and assistant and the crowd were fantastic again.

“I think they were really encouraged by the performance and everyone will have left this stadium with hope for the future and it is set up nicely for the first team to get some more points on the board in their next league game.”

All of Bolton’s starting XI had played at least some part in a demoralising opening to the season which had seen a team woefully out of their depth, through no fault of their own, concede five goals in each of their last four matches.

But they showed no ill-effects from those pummellings as they, too, were energised by the feeling the slate had been wiped clean and when a huge cheer greeted the winning of their first attacking throw, they seemed to visibly grow in stature.

Wanderers’ goal in the eighth minute was a metaphor for the optimism now flowing through the club.

Dennis Politic, whose previous claim to fame was scoring a 45-yard lob which went viral on social media while on loan at Salford City last season, confidently produced two or three stepovers before unleashing a 25-yard shot which goalkeeper Sam Hornby got a hand to but could not keep out.

Fifteen minutes into the game, fans were still streaming into the lower tier of the Nat Lofthouse Stand, belatedly opened after the other two sides of the ground filled up, and they were greeted by a party atmosphere, with a passage of possession seeing each pass accompanied by an “Ole” from the crowd.

After their recent troubles both off the field and on – having lost five and drawn one of their matches this season – Wanderers were due the good fortune of Jordan Gibson and Harry Pritchard both hitting the post for Bradford.

Even setbacks were greeted with positivity as Paudie O’Connor’s equalising header six minutes after half-time brought a roar from the home fans which drowned out the small band of travelling supporters.

The ground, like the club, buzzed with energy again having been on life support days ago as ‘Wanderers we love you’ and ‘Wanderers till I die’ reverberated around the stadium.

Even defeat on penalties could not dampen their enthusiasm.