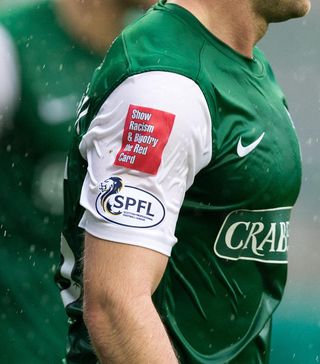 The founder of Britain’s largest anti-racism education charity believes there is no need for a clampdown on discriminatory behaviour in grounds, but says it is time for the Premier League to start funding his work.

Ged Grebby set up Show Racism the Red Card with ex-Premier League goalkeeper Shaka Hislop in 1996 and has seen it grow into an organisation that reaches 50,000 people a year with its school visits, workshops and events at clubs.

Despite being frequently referenced by the game’s leaders, the only money the charity gets from English football is via the Professional Footballers’ Association, although the Football Association does provide a small amount to cover the cost of prizes for its annual schools competition and the clubs give it free access to facilities and players.

It does get financial support from the Scottish and Welsh FAs, however, as it fulfils the role there played by Kick It Out in England, which means it also runs the main anti-racism campaigns and reporting of abuse.

Their support, plus the money it receives from the PFA, trade unions, government and its own fundraising efforts, combine to give Grebby a budget of £1million, which he uses to fund a full-time educational team of 24.

Speaking to Press Association Sport at the award ceremony for that schools competition, Grebby said: “We know all the money in football is in the Premier League. So we’re not demanding money from the grassroots or even the other leagues.

“But we think now is the time for the Premier League to back us. Because, as John Barnes has so articulately put it, education is the key. If you’re talking about drastic action and manifestos, now’s the time to fund education.”

Grebby explained that the charity visits a school a day in England but also holds larger events at clubs where more than one school will attend. A typical club event would involve workshops, a ground tour and a question-and-answer session with a couple of players.

Show Racism the Red Card used to get much of its funding from local authorities but, in the austerity era, that has dried up. In fact, Northumberland County Council has just cut £15,000 of its funding to the charity, making it even more important that football as an industry steps up.

Grebby, however, does not believe the answer to this season’s spate of discriminatory abuse is a “clampdown”.

“When we were in the dark days of the 1970s and 80s, with monkey chants and bananas on the pitch, it would have been legitimate to have a campaign of closing grounds and so on,” he said.

“But now it’s a few individuals or it’s on social media. It’s great it’s being highlighted but it’s society’s problem.

“The point we always make is if you have a clampdown – if you take season tickets away, if you ban people, if you close stadiums – you don’t change attitudes, you harden them.

“There have been numerous cases where people have been banned for life and we have told the clubs, ‘Give them a shorter ban and get them to talk to us’. Because you don’t want those people going back into the community and passing that hatred on.”

And finally, a MASSIVE thank you and well done to all the young people throughout England who took part in this years competition 🎨📽️📝 pic.twitter.com/na8HeGcDn4— ShowRacismtheRedCard (@SRTRC_England) April 26, 2019

Former Labour minister and current mayor of Greater Manchester Andy Burnham was at the awards ceremony at Manchester City’s Etihad Stadium and he is hugely impressed with the charity’s work, although he does see the merits of a clampdown.

“Education is essential. Charities like Show Racism the Red Card have made a difference and I don’t think today’s young people see difference in the way previous generations did,” Burnham told Press Association Sport.

“English football has moved on a lot, and I speak as an Everton fan who saw racism at Goodison in the 1980s. We don’t see that overt racism in grounds in the same way.

“But the sad thing is social media has given these people a new voice. The social media companies need to take more responsibility.

This afternoon the Mayor of Greater Manchester has presented awards to winners of the @SRTRC_England annual school competition.— Mayor Andy Burnham (@MayorofGM) April 25, 2019

“Free speech does not include hate speech. I’m afraid it’s not good enough for them to say they’re just a platform. They need to do much more.

“But I also believe the football authorities need to take this more seriously. I believe the Football Association has done so, but the same can’t be said for UEFA and FIFA. Their response is still very ineffective.

“When you see the levels of racism in places like Italy and Russia, the sanctions are not acceptable. We can’t preach but we can say we have taken decisive action to tackle the issue here.

“I think social media has dragged us backwards a bit and it requires a response from those companies but also a stronger lead from the game’s leadership. If that means players walking off the pitch, points deductions and stadium closures, so be it.”